Journalists who are affiliated with news media headquartered overseas and are staying in Korea for more than a year are referred to as international correspondents stationed in Korea. They can apply for a Press Card issued by FPCKorea. Any international journalist possessing this Press Card can access facilities and services provided by FPCKorea, including press releases, briefings and seminars.

In the Republic of Korea, both domestic and international journalists can generally work without government permission. There is no law that regulates or restricts the foreign media working in Korea. However, to cover special issues, journalists may be required to contact a relevant office in advance.

International journalists visiting Korea for a short time to cover issues are referred to as international correspondents temporarily in Korea. They can request FPCKorea support when arranging and scheduling interviews with government officials as well as when receiving permission to photograph and film in such sites as Deoksugung Palace. Correspondents should begin discussing details and requesting assistance with news gathering activities at least three weeks in advance. 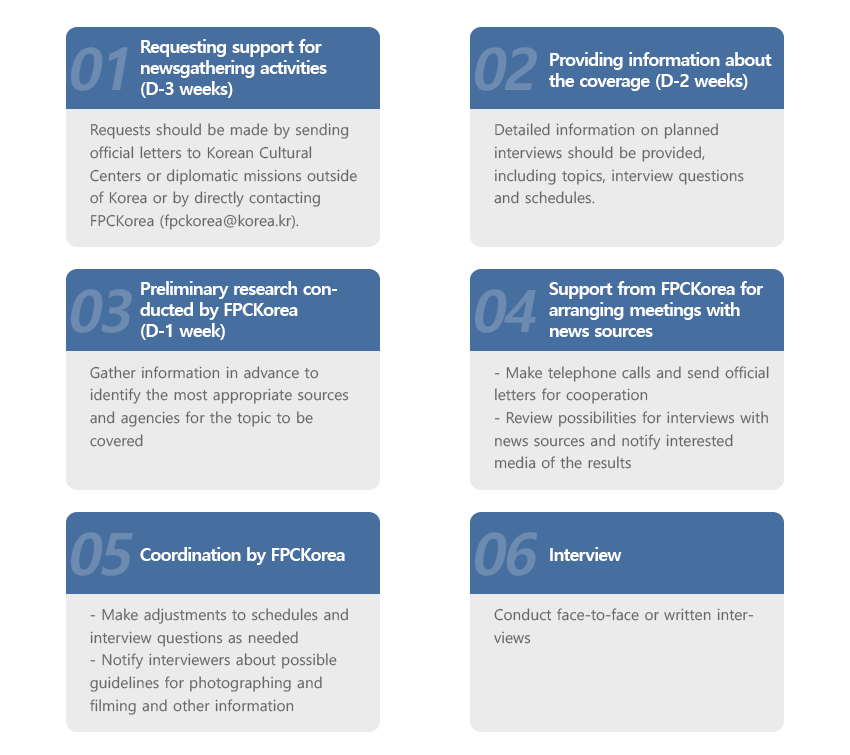 When visiting Korea for less than one year, journalists can get a tax exemption on equipment.

KOCIS operates an international press center for major events in Korea and provides support for foreign correspondents. If you have any inquiries about the press center, please contact the Foreign Press Center Korea (FPCKorea), part of KOCIS, via fpckorea@korea.kr.